After the Jesse James cheating scandal heated up, more details have come to light regarding Sandra Bullock's ex husband's and mistress, Michelle "Bombshell" McGee. A tattoo model, whatever that is, Michelle McGee is listed on www.SoCalGlamourGirls.com. There, for a fee, subscribers can see her on webcam or chat with her online. "I am the hottest busty tattoo and fetish model you will ever meet on webcam. Come have a hot, steamy affair with inked girls like me on live video," her bio says. Gross. We now know that Jesse James obliged.

The site says it's a place for "sexy live video chats" and "discreet affairs w/all American Girls!" Maybe James, who wasn't so discreet, should have gone this route. This isn't to say Michelle "Bombshell McGee" doesn't have other ambitions.

"With all these tats, you might think I was a big partier," she writes. "Sure, I get really wild in the sack with my men, but I’m actually a graduate student in college looking around for the right sugardady [sic] to teach me and be my sexy mentor." "If you like big boobs and tattoos, mine will be the perfect fit." Michelle McGee also stripped at Larry Flint's Hustler Club before being fired. She is currently a featured stripper (by the name Avrey) at San Diego's Pure Platinum Kearny Mesa club, but has not been in to work in the last few days. Wonder why.

To top it all off, the model is also a mother of two grade school-aged children. "She was really quiet and a nice girl," a former landlord of McGee's reports. "She had two kids and she didn't have a lot of visitors." Not even Jesse James stopping by for a quickie? Oh, that's right, they only had sex at his place. Three times a day, we're told.

Madrano says she remembers when McGee first told her about meeting James at a strip club. "I said, 'Wait, a minute -- isn't he married to Sandra?'" Madrano recalls. "And that's when she told me, 'Oh, well. That's just a sham for publicity.'"

That's why James didn't use Bullock, 45, as a contact on Celebrity Apprentice last year, McGee explained to Madrano. "'I'm his girlfriend,'" Madrano recalls McGee telling her. When she was with James, McGee often got "mad" at him because "they were either supposed to spend time together and didn't, or I think some follow-up from him wasn't there," Madrano tell Us.

Madrano says McGee often retaliated, saying things like: "'Fine, then the next time you want me around, I'm not gonna be there!'" McGee reportedly earned $30,000 for talking to In Touch about the affair (the tabloid has not commented on those reports). But Madrano tells Us she isn't sure if McGee did the interview for fame. "I can't get inside of Michelle’s head," she tells Us. "I do think that she really likes him, knowing what I know about Jesse and knowing Michelle personally. If Sandra was out of the equation completely -- or, I should say, never in the equation -- I think that Jesse and Michelle [would be] good together. They just seemed to fit, based on personality and looks. But I don't know Sandra, and I'm not saying anything bad about her because I know she is 'America's Sweetheart' and she is awesome." 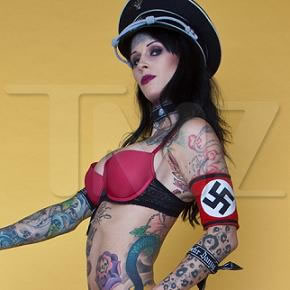 While tattoo model Michelle "Bombshell" McGee might be a home wrecker - having recently revealed her 11-month affair with Sandra Bullock's husband Jesse James -  one thing she says she's not, is a white supremacist.

The insider says the photoshoot was a stab at being "provocative'. The outfit - including a swastika armband, dagger and Nazi backdrop, were all the photographer's idea.

The photographer's idea or not, McGee's ex-husband, Ronald Shane Modica, says Michelle is a fan of that lifestyle.

In child custody papers filed earlier this year, Modica claims Michelle often made the Nazi salute and even has a swastika tattoo on her stomach.

As for the letters "W" and "P" tattooed on the back of her legs?

In the words of Harvey Levin's celebrity site, "stay classy".